The server functionality and use for the Web

The Internet is an inexhaustible source of information for us. And all we have to do, if we want information, is to query the Internet to get the answer we want.

But who provides this information and how? All this is possible thanks to what is called the webserver. This machine responds to the computer requests of our browsers also called Web Clients.

Web servers are essentially simple computer programs that distribute the web page at the request of the web client. The machines on which this program runs are usually called servers, with the names web server and server almost used interchangeably.

When do you need a web server?

Typically, web servers are used by web hosting companies and professional web application developers. But, in reality, anyone who meets one of the categories below can use it.

How do web servers work?

A page on the Internet can be displayed when the browser requests it from the Web server and the latter response by sending the code for this page to the browser. A simple schematic representation of this is given below: 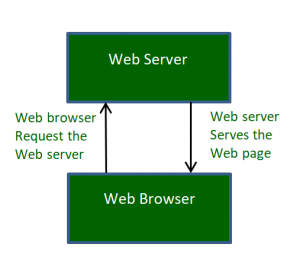 This process consists of 4 steps, which are:

By searching in his cache.
By asking one or more Domain Name System (DNS) servers.
Note: Any website is assigned an IP address when it is created on the webserver.

The browser requests the full URL: after knowing the IP address, the browser now requests a full URL from the webserver.

For example, You may have seen the 404 error when trying to open a web page, which is the message sent by the server when the page does not exist.

Error 401 is another common problem when we are denied access due to incorrect credentials, such as username or password.

There is many web server software, such as Apache, Microsoft IIS, Nginx Web Server, Light Speed ​​Web Server. But, the two most popular are:

Apache HTTP Server: This is the most common and widely used web server. It is developed and maintained by the Apache Software Foundation. The software is produced under the Apache license, which makes it free and open source.

Microsoft Internet Information Service: Microsoft IIS (Internet Information Service) is the second most used Web server. Its market share is increasing every day very quickly and is likely to reshape Apache in the years to come. The IIS server has all the features like Apache, but it is not open source. Developed and updated by Microsoft, it, therefore, works with all platforms of the Windows operating system.

In summary, web servers can be used by an individual or by web hosting companies. The website can be viewed by anyone around the world (if the software is configured to allow it).

The power of a web server

We have seen that a Web server can be implemented by an individual or by hosting companies. The two uses will not require the same power. It is easy to imagine that a professional host will install many websites on the same machine (pooling). It will, therefore, need powerful machines so that response times are satisfactory for Internet users but also for Google. And this is not often what we observe: low-cost shared hosting (around one hundred dollars per year) is often incompatible with the professional use of the Internet (e-commerce, acquisition of prospects). Indeed, the machines are undersized, the number of sites hosted on each machine is too high or the distribution of sites on the same machine poorly calibrated. in fact, when a site with high traffic and smaller sites coexist, resources are mainly monopolized by the large site, which penalizes small sites.